In early August, the U.S. government took proactive measures to protect 22 embassies and consulates from terrorist activity by closing those facilities. In response to terrorism intelligence, U.S State Department spokesperson Jen Psaki stated, "This is not an indication of a new threat stream, merely an indication of our commitment to exercise caution and take appropriate steps to protect our employees, including local employees and visitors to our facilities."

The State Department statement highlights the needs for security planning for private, public, government, and industry facilities. Response planning should address applicable threat and risk assessments results and incorporate security measures and appropriate procedures to protect facility employees and visitors. Two key factors that must be considered in security planning include the specific nature of the threats and the available warning time allotted.

The move by the State Department reflected these two prime security response factors. "Once you take targets away, it buys you additional time to try and disrupt, to identify the cell, the operators in country and the region, and work with your partners in the region to try and ... get them in custody or disrupt the plot," she said. "So, some of this operationally is about buying time."

While many facilities may not be targets of a specific terroristic threat, facilities must be prepared to respond to such an event.  Companies should incorporate appropriate, site-specific responses to counteract the four major weapons associated with a terrorist attack. Specific roles and responsibilities of facility personnel, law enforcement, fire officials, and other first responders should be clearly described, reviewed, and updated as necessary.

Below details the FEMA identified four main weapon types most likely to be used by terrorists and associated response actions:

1. Conventional weapons (bombs and other explosive devices): The goal is to place inhabitants in a protected space and/or increase the distance from the potential explosive area. The following actions should be considered:

2. Chemical weapons (poisonous gases, liquids, or solids): The following actions should be considered:

3. Biological agents These agents are organisms or toxins that have the potential to incapacitate people, livestock, and crops. They can be dispersed as aerosols, airborne particles or by contaminating food and water. These agents may not cause symptoms for days or weeks following an exposure. The following actions should be considered:

4. Nuclear weapons (potential exposure to radiation) The overarching concern is to get individuals to a protected space or to increase the distance from the blast area. FEMA recommends taking shelter immediately as the three protective factors include distance, shielding, and time. Issues for consideration include, but are not limited to: 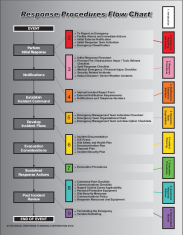