According to a report released by the National Climate Data Center (NCDC), national weather and climate-related disaster damages totaled nearly $110 billion in 2012, the second-costliest year for natural disasters since 1980.  At least $1 billion in damages resulted from each of the eleven 2012 natural disasters, including spring tornado outbreaks, a derecho (a long-lived wind storm), a year-long drought, associated heat waves, and wildfires.

“What we are seeing this year (2012), is not just an anomalous year, but a harbinger of things to come", said Jane Lubchenco, National Oceanic and Atmospheric Administration administrator. Globally, the cost of disasters is also rising. The World Bank's Independent Evaluation Group (IEG) has revealed that disaster’s costs are 15 times higher than they were in the1950s.

According to statistics, the volatility and cost implications of disasters continue to rise. Natural disaster experts suggest a two-prong approach to combat natural disaster-related circumstances: adaptation and mitigation. In the corporate world, the two concepts must be intertwined. Adaptation refers to the necessary modifications that account for a changing environment. Adaptation is necessary for the survival of a species, as well as a business.

Initialization of corporate preparedness and prioritizing response planning is the foundation of private sector disaster adaptation. However, pre-emptive mitigation efforts are crucial to preventing incidents and minimizing costly impacts. Hazard mitigation is the effort to reduce loss of life and property by lessening the potential occurrence and overall impact of an incident. The mitigation process ideally requires the implementation of preventative measure before the next disaster, crisis situation, or even regulatory inspection. There are costs associated with analyzing threats, reducing risks, and implementing mitigation measures. However, an investment in the long-term well being of a facility and/or company through planned mitigation actions can increase overall site safety, operational sustainability, and financial security. 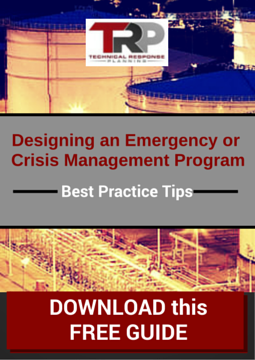