On September 3rd, a 5.8 magnitude earthquake jolted Pawnee, Oklahoma, making it the state’s largest recorded earthquake. The shallow quake occurred approximately 55 miles WNW of Tulsa, yet could be felt across six neighboring states.

Although early detection systems are under development, it is difficult to target when an earthquake will occur or where the epicenter will be located. According to a March US Geological Survey report, “Seismic activity is on the rise in certain energy-intensive states after a relatively stable period of about 30 years.” The report showed that approximately 7 million people live and work in areas of the central and eastern U.S. with potential for damages caused by induced seismicity.

Response planning for unpredictable events is a core element of corporate preparedness. Without a robust early detection system in place, companies must rely on reinforced construction methods and structural mitigation opportunities to minimize potential infrastructure damage. However, earthquake preparedness and response planning can limit the effects of an earthquake.

The actual ground movement created by earthquake is seldom the direct cause of death or injury.  However, earthquakes can severely damage sensitive infrastructure and generate vibrations that can shake, damage, or demolish buildings, each of which can cause great damage. As a result, most earthquake casualties result from falling objects and debris.

Upon immediately sensing seismic action or aftershocks, it is prudent to take protective measures. The following procedures should be implemented in the immediate aftermath of an earthquake: 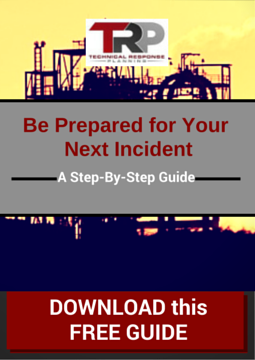 Information and communication are becoming more intertwined than ever before through the availability and affordability of smart phones. This evolving wave of broad accessibility offers new options in emergency response planning and management. There are a variety of free and low-cost smart phone apps that can assist EHS managers and first responders, ranging from warnings of impending crises to response aids providing instantaneous applicable information. With pertinent information at the fingertips of responders, the decision-making process can be improved. As a result, a response can often be accelerated, potentially minimizing the effects of the incident.

This list provides a sample of emergency preparedness and response smart phone apps. (TRP Corp does not endorse any specific app, as this list is for informational purposes only. Readers should evaluate each app for relevance, keeping in mind the necessity for common response language as dictated by the Incident Command System (ICS).)

Emergency managers and first responders should be knowledgeable of threats based on geographical risk assessments. Specialized apps, such as Earthquake Alert, that provide specialized information based on these assessments may be beneficial.  The number of location-based emergency preparedness apps, such as ReadyVirginia andNorwich/Chenago County NY EMO, continue to rise. Ideally, location based apps should be an all-inclusive, singular mobile resource that allows users to access accurate and timely information before and in the event of an emergency. Unfortunately, app development requires funding and technology specialists, which may impede short-range intuitive design and rapid availability. 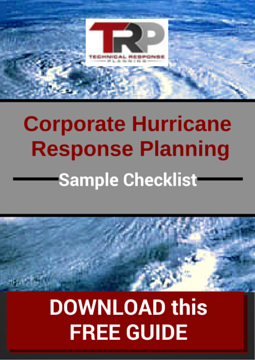 Come Rain, Sleet, Snow, or Hail...Are you Prepared for an Emergency?

A few months ago, AccuWeather came out with its long range United States’ forecast through the winter 2011/2012. The prediction was that cold and snowy weather will prevail across a large section of the country. Although snow amounts are predicted to be less than what was experienced last year, ice could be potential problem as far south as Alabama and Georgia. But despite predictions, companies should be prepared to deal with whatever unusual weather events may occur.

Depending on a facility’s specific latitude and longitude, a site-specific risk analysis for severe weather should be conducted for each facility, and plans should be prepared accordingly. Specific weather planning checklists can be developed for blizzards, floods, ice, tornadoes, earthquakes, and hurricanes. Despite the weather situation, many common best practices can be implemented into a weather planning checklist including, but not limited to the following action items:

For an understanding of the necessary elements in creating an effective fire pre plan, download our Fire Pre Planning Guide.

Preparing for the Unexpected: Earthquake Preparedness

Companies cannot pick which disasters to plan for.  Although some natural disasters can be predicted, such as a hurricane or wildfire, no one can be certain when or where a natural disaster may occur. Hurricanes can cause tidal surge, wind damage, power outages, and coastal flooding. However, no one could have predicted the extreme 100-year flooding in land-locked Vermont that resulted from Hurricane Irene.

Planning for the unpredictable is part of emergency preparedness. Earthquakes usually strike without warning and leave no time for personal protective actions. However, if the seismic action is a prolonged shaking and rolling event, it is prudent to immediately take protective measures.

While the initial quake may be unpredictable, aftershock activity typically accompanies most earthquakes. The following procedures should be implemented in the immediate aftermath of an earthquake, particularly within the vicinity of a pipeline system.

The actual ground movement in an earthquake is seldom the direct cause of death or injury.  Most casualties result from falling objects and debris because of the shocks. However, earthquakes can damage sensitive infrastructure and generate vibrations that can shake, damage, or demolish buildings, each of which can cause great damage. Being prepared for the unpredictable may not be able to save infrastructure, but can limit the effects on the greatest assets, a company’s workforce.

A situation requiring confined space entry can be encountered in many industrial operations. Authorized entry should require a pre-entry checklist to ensure rescue team members enter safely. The need for a confined space emergency rescue can be the result of earthquakes, construction or support failures, or any incident that results in a narrow and constricted entry, preventing easy access by rescuers.

1. Discuss prior to entry:

OSHA uses the term "permit-required confined space" to describe a space that has one or more of the following characteristics:

For tips and best practices on designing a crisis management program, download Tips for Effective Exercises.

An estimated 300 million people were affected by natural disasters in 2010. The devastation has continued in 2011 with Japan’s March’s earthquake and subsequent tsunami, the tornadoes ravaging the southeastern U.S., and massive flooding in America’s heartland. Companies must be aware of the risks posed by potential natural disasters that may impact their locations, and take sensible precautions to protect their employees, the environment, and their assets.

According to Brookings Institute’s London School of Economics, “A Year of Living Dangerously”, natural hazards by themselves are not disasters. The study states “it is their consequences and the ability of the local community to respond to them that determine whether the event is characterized as a disaster.”

While there is little we can do to prevent the occurrence of natural disasters, companies can develop emergency response plans to reduce the impact to personnel safety and property damage. Natural hazards tend to occur repeatedly in the same geographical locations because they are related to weather patterns or physical characteristics of an area. Depending on your specific risks, FEMA lists the following hazards that may be included in your emergency response plan:

For predictable naturally occurring events, such as a hurricane or potential flooding, planning can be accomplished before the incident occurs. Such planning should include, but is not limited to the following:

Unfortunately, some natural disasters provide little or no warning. In these instances, prior planning and training is of the utmost importance. Procedures may include, at a minimum: